Just when you think you’ve seen the worst movie ever made, along comes a pile of toxic waste called Bullet Train. It’s an action thriller about an army of incomprehensible assassins all trying to kill each other on the famous aerodynamic marvel that travels 320 miles from Osaka to Tokyo in just a few hours, costs $90-billion to build, and charges $132 for a one-way ticket. During the course of an interminable and unimpeachably excruciating two hours and six minutes, this abomination of a movie not only kills off almost everyone onboard but demolishes two of the world’s most miraculous trains as well. As movies go, it is vulgar, vile, violent and vomitous. “The end of the line is just the beginning” is the kicker for the ads. Let’s hope that’s not a deadly promise for a series of unwanted sequels.

Brad Pitt, of all people, trashes his talent and diminishes his usual reliability as some kind of hit-man secret agent called Ladybug. It is never clear who he works for or what he’s doing on the bullet train in the first place, but he ends up being only one of a gang of cutthroat assassins who are searching for a case of money. First, he is seated near two blood-splattered fiends named Tangerine and Lemon, who are supposed to be twins, although one is Black (Bryan Tyree Henry), the other is white (Aaron Taylor-Johnson) and both mumble their way through every effort to explain what their purpose on the train might be. This is one of the film’s many annoyances, until you end up grateful for an incoherence that mercifully prevents you from hearing dialogue that is unspeakably pointless and stupid. There’s a girl named Prince, who murders her brother with a potion that makes its victims bleed to death from every orifice. Prince (played by Joey King, one of the worst actresses I’ve ever seen on screen) may or may not be the daughter of the King of the Japanese underworld called White Death (poor Michael Shannon, slumming his way through the most abysmal work of his career). There’s another maniac who howls like a wolf on cue. He is called The Wolf (Bad Bunny). Cut to a wedding where everyone eats poison food, followed by a scene of projectile vomiting. Later, The Wolf shows up on the bullet train, and Brad Pitt stabs him. Up to this point, no single scene or line of idiot dialogue makes one iota of sense. I still didn’t walk out, because I hoped clarity would eventually enter the picture. But in the next scene, Brad Pitt is stalked by the brutal savages he’s been stalking himself, while the film pauses to interject a Japanese cartoon. Ladybug: “I just want to get off this train and go see a Zen garden.”

It’s not advertised as a comedy but Bullet Train is so demented, misguided and abstruse that you find yourself laughing at it in spite of yourself. It features the worst assemblage of bad acting ever collected in a single film. Did I forget to mention there’s also a poisonous snake onboard, slithering beneath the seats and waiting to strike? Pistol-whipped, machine-gunned, stabbed, poisoned and finally bitten by the reptile, Brad Pitt emerges with nothing more than a Band-Aid, nonchalantly expressing he’s glad he had his morning dose of snake-venom antivenin. One of the killers dies with blood pouring from his eyeballs while the soundtrack plays “I’m Forever Blowing Bubbles.” You can’t make up this stuff.

In an earlier submental abhorrence this year called The Lost City, Brad Pitt made a cameo walk-on to boost the box office intake for his pals Sandra Bullock and Channing Tatum. In Bullet Train, they return the favor. They should all be forced to burn their membership cards in the Screen Actors Guild. Nothing happens worth writing home about except some of the irrelevant special effects. The director is stuntman David Leitch, who brings to the assignment zero knowledge of form, craft or discipline. The script, by Zak Olkewicz, is boring, witless and imbecilic. No character is developed seriously or deeply enough to reach more than the most superficial surface identity. That includes the star. You couldn’t call it an actual performance, but Brad Pitt makes the dumbest appearance of his career. Call it a celebrity sighting.

Observer Reviews are regular assessments of new and noteworthy cinema. 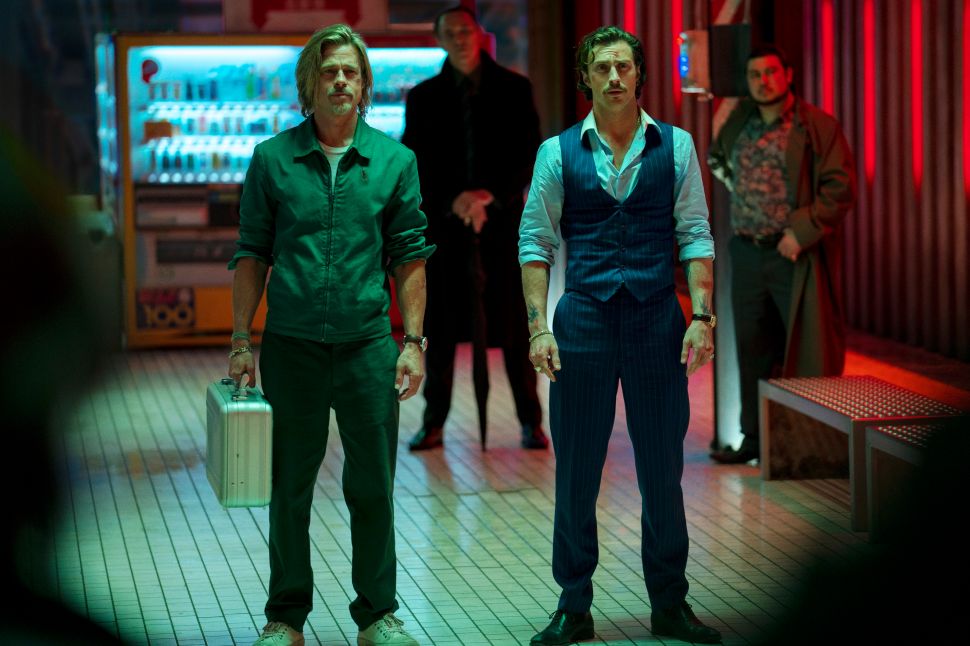